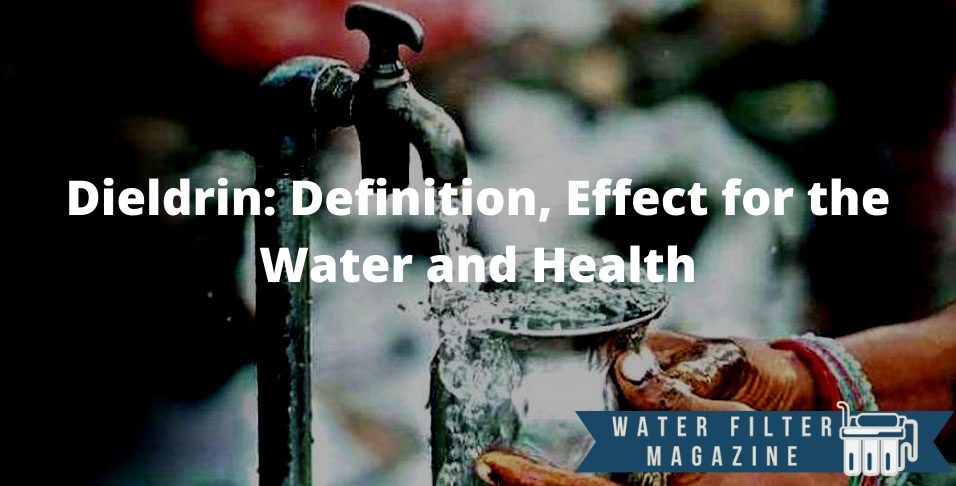 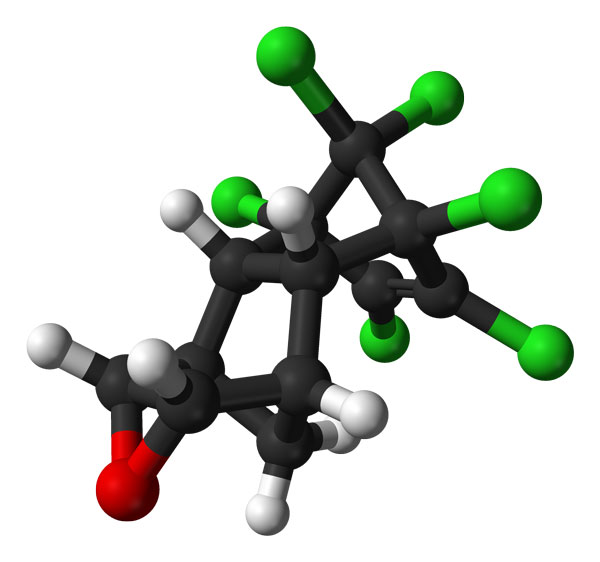 Dieldrin is a synthetic organochlorine insecticide and represents an oxidized version of Aldrin. Introduced in 1948 by J. Hayman & Co., Dieldrin was largely used from the 1950s to 1970s as an alternative to DDT. Proven effective against insect pests, Dieldrin was applied to corn, citrus, and cotton crops. Also, Dieldrin was used for mothproofing carpets and clothes.

Although the US Department of Agriculture canceled all uses of Dieldrin in 1970 due to its harmful effects on human health, the US Environmental Protection Agency approved its use as a prophylactic treatment for timber against termites. In 1987, Dieldrin was banned for all uses, and the manufacturer canceled the registration for use in controlling termites.

Dieldrin is a highly persistent pollutant that has proven toxic to a wide range of animals and humans. Long-term exposure to Dieldrin has been linked to central nervous system and liver problems (including cancer, Parkinson’s disease, immune and reproductive issues).

Some of the Dieldrin chemical and physical properties are listed below:

What is the use of Dieldrin?

Dieldrin is an effective insecticide that poisons the stomach of insects. Due to its properties, the Dieldrin was widely used for:

What are the effects of Dieldrin on humans?

Dieldrin is highly toxic to humans, especially when ingested, inhaled, or absorbed at skin level. Known as a persistent organic pollutant, Dieldrin accumulates in the fatty tissues, liver, and the human brain.

Some of the harmful effects of Dieldrin on human health are:

Is Dieldrin harmful to our environment?

Yes, Dieldrin is harmful to the environment. Dieldrin is a persistent organic pollutant, meaning that it is very resistant in nature. Due to its low solubility in water and tendency to strongly bind to soil, Dieldrin has a very slow disappearance, and the half-life of Dieldrin is five years. However, in tropical areas, Dieldrin disappears faster by volatilization.

High concentrations of Dieldrin end up in water bodies due to contamination from agricultural runoff and soil erosion. Dieldrin is also stored in the adipose tissue, liver, muscle, and brain of mammals, fish, and birds, thus causing adverse effects and disturbing the ecosystem. Moreover, Dieldrin ends up in the food chain.

What are the effects of Dieldrin on animals?

Numerous studies have shown the fact that Dieldrin is highly toxic to animals. Regardless of the poisoning route, Dieldrin causes a series of harmful effects on mammals, fish, or birds. The effects of Dieldrin on animals are listed below:

Is Aldrin and Dieldrin the same?

Both Aldrin and Dieldrin are persistent organic pollutants used as insecticides. Their chemical structure is similar, and they have comparable levels of toxicity. Typically, Aldrin and Dieldrin are discussed together because Aldrin quickly breaks down to Dieldrin through epoxidation. This reaction takes place in the body but also in the environment due to sunlight and bacteria action. Due to the epoxidation of Aldrin, Dieldrin is mainly found in the environment.

Can we avoid using Dieldrin?

Yes, the use of Dieldrin can be avoided by practicing organic agriculture. Also, when speaking of termites control, alternative solutions can be used. Physical barriers or bait systems are environmentally friendly and have good results similar to the use of Dieldrin.

How does Dieldrin contaminate water?

Although Dieldrin has low water solubility, it can still be found in aquatic environments and drinking water. Higher levels of Dieldrin are caused by the contamination from agricultural runoff and soil erosion during agrarian use. Also, Dieldrin can contaminate groundwater through leaching from polluted soils. Due to its harmful effects on human health, Dieldrin was included by EPA on the Contaminant Candidate List. However, no regulatory action was deemed as necessary.

What are the effects of Dieldrin when consumed in drinking water? 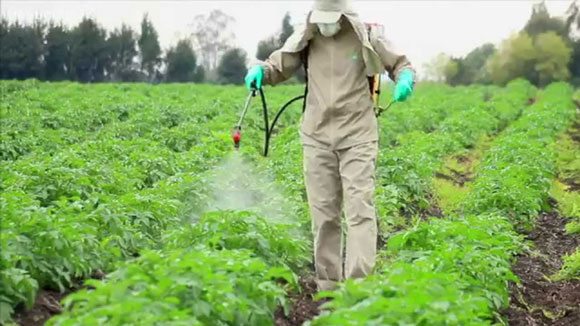 Dieldrin is highly toxic to humans and animals alike. Several cases of accidental poisoning through ingestion included fatalities. The main effect caused by Dieldrin poisoning is related to major motor convulsions. Due to its high toxicity, the World Health Organization had Dieldrin listed in the Guidelines for Drinking-Water Quality (GDWQ).

The harmful effects of Dieldrin depend on a series of factors such as:

The health problems following prolonged exposure to high doses of Dieldrin in drinking water are listed below:

Is it safe to have Dieldrin in drinking water?

No, having high concentrations of Dieldrin in the drinking water may pose severe threats to human health and the aquatic ecosystem. However, drinking water at or under the guidance value will have little or no risk for human health.

Can Dieldrin be removed by using a water filter?

Yes, Dieldrin can be effectively removed from water using granular activated carbon filters or reverse osmosis systems. To better understand how pesticides are removed from drinking water, it is important to learn how water filters work.

Reverse osmosis systems work by forcing the water through a membrane that blocks larger particles and lets water flow through. Dieldrin particles are thus retained. The granular activated carbon filters represent a cheaper and more effective method, though. Dieldrin molecules are retained on the filter surface through the adsorption process.

What is the toxicity level of Dieldrin?

According to the World Health Organization, the concentration of Dieldrin in drinking water and aquatic environments should not be higher than 0.01 mg/m3. Although the US Environmental Protection Agency has classified Dieldrin as a possible human carcinogen, there is no US EPA standard for Dieldrin in public drinking water. However, the US Department of Public Health sets health-based action levels for chemical contaminants in drinking water. These action levels differ from state to state, and however, they should not be higher than 0.03 mg/m3.

Is Dieldrin more toxic than the other Contaminants?

The most common contaminants in the drinking water (the List Element) and their toxicity comparisons with Dieldrin are listed below:

Yes, The US Environmental Protection Agency classified Dieldrin as potentially cancerous to humans. Although the pesticide was proven to cause liver tumors in experimental animals, there are no scientific pieces of evidence to prove Dieldrin’s cancer potency to humans. However, the risk was not completely eliminated, and further research is needed. The lethal dose of Dieldrin was estimated to be approximately 10 mg/kg of body weight per day. Severe cases of Dieldrin poisoning were reported, even several fatalities.