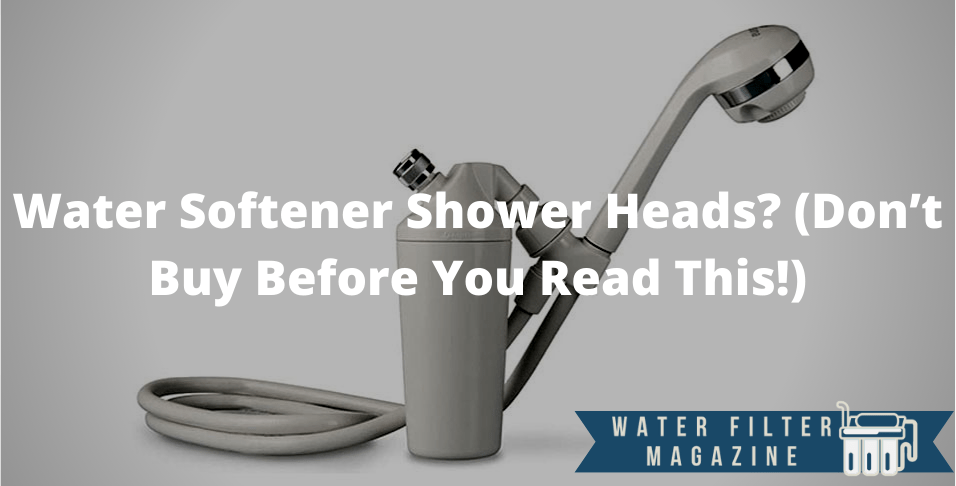 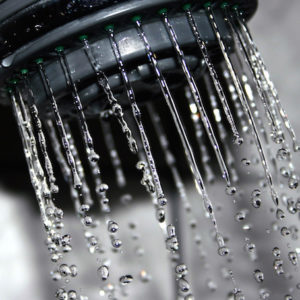 In the following article, we explain how water softeners work, and we reveal why a showerhead cannot work as a softener, even if it’s marketed as one.

In the second part of the article, we take a look at some of the water softening solutions that actually work, and we examine the benefits of using soft water while showering.

Are you looking for a reliable way of filtering shower water?

Check out our list of the top shower water filters for hard water available today!

Or see the top shower water filters in this chart;

What Is Water Softening and How Does It Work?

Hard water has a high mineral content, and it’s especially rich in large amounts of calcium and magnesium carbonates, but also ferrous iron. There can also be a variety of chemical compounds present in drinking water. The problem with hard water is that the calcium and magnesium ions interact with the fatty acids in the soaps, making them a gelatinous curd. Because the soap is less efficient, you have to use more of it to wash. Not only will this curd make the soaps more inefficient, but it will also make your bathroom look uncared for. When the hard water splashes the walls of your bathroom, some of the minerals in the water drops will create scale build-ups. Due to the scale built-ups, some of the water pipes can also be blocked.

Water softening is the process through which the calcium, magnesium, and other metal cations in the water are removed. This is done by changing the calcium and magnesium ions’ charges. While this might seem complicated at a first glance, it’s really not.

However, if the beads were to keep the magnesium and calcium for themselves, we could use every water softener a single time. So instead of keeping them for themselves, the beads trade them with similarly charged elements. And the chosen element is sodium. Sodium ions are positively charged. While they’re not as powerful as the calcium and magnesium ones, they can make up for it in sheer numbers. After the water passes through the beads and the minerals cling to their surface, the beads will be flushed with a strong brine solution. Every water softener has a separate brine tank that holds the brine solution. Here’s a simplified version of how this works

As you could see, water softening is a very complex chemical process. And the most important part of that chemical process is the ion exchange between the sodium-filled beads and the calcium and magnesium. Without this exchange, the process wouldn’t work. Now, this is a simple chemical exchange, but there are a lot of elements that come into play. The beads have to be charged with sodium, to start with. They can’t do that unless the sodium is constantly regenerated. And the sodium can only regenerate if the beads are immersed in a strong brine solution. Once they’re removed from the beads, the calcium and magnesium ions have to be flushed into a separate drain.

Simply put, there is not enough time for the water to be softened. Water softening is a long-lasting process. Here’s how efficient water softeners do it.

Water softeners use an automatic regenerating system. Some models use a computerized system that tracks how much water you use. When the system detects that enough water passed through the mineral tank and the beads are depleted, it will automatically trigger the regeneration sequence. During this sequence, some models will use a reserve resin tank to produce soft water. The models that don’t use a reserve resin tank won’t produce soft water during this time.

Some water softeners use an electric timer to flush and recharge the beads on a regular schedule. During the regeneration process, the softeners don’t produce soft water. And other systems use a mechanical meter to determine how much water has passed through the system and start the regeneration sequence. These models might come with not one, but two mineral tanks, so they will soften the water at all times.

As you can see, every efficient system goes through a regeneration sequence. Even if the shower head water softener would work at first, the beads they use would be charged with minerals in a short time, and without regeneration, they would be rendered useless.

You may also be interested in our article What is the Ideal Shower Head Height.

What Can You Use to Soften Your Water?

Now that we explained why using shower head water filters is not a viable solution to getting soft water, let’s take a look at some of the water filtering solutions that are.

Reverse osmosis water filtration is also known as hyperfiltration, and it’s one of the best water treatments available 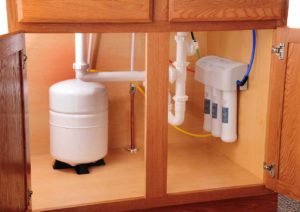 for households. This system gradually eliminates the particles in the water, and the end result is healthy and extremely clean tap water.

The first line of defense the RO system uses is a prefilter. When the water passes through the prefilter, all the large particles that float through it will be removed. These particles include but are not limited to salts, scale, rust, and sediment. At this point, most of the calcium and magnesium are removed, so the water is softened. Some models even use an activated carbon filter to remove the chlorine and other dissolved particles that might be present in the water.

The second filtration medium is the membrane. The membrane is covered in extremely small pores, and even the smallest contaminants are removed at this point. In fact, the pores are so small that not much will go through them except for the hydrogen and oxygen molecules that form the water.

Using a reverse osmosis filtration system is a great way to soften your water and make it healthier at the same time. This filtration technique will remove almost all the contaminants in the water. 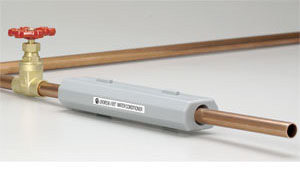 Magnetic water conditioners are not exactly water softeners, but they can reduce the effects of hard water. In fact, these might be exactly the units you should be looking for if your water source is not very hard.

These units can be attached to the waterline, and they produce a magnetic field. When the hard water passes through the magnetic field, the impurities and salts in the water will change their behavior. As a result, instead of sticking together and attaching them to the pipes and appliances in your home, the calcium and magnesium molecules will still be present in the water, but they will flow freely down the drain.

A potassium chloride water softener will use potassium chloride instead of sodium to remove the calcium and magnesium in the water. Since this process doesn’t use sodium, the water is suitable for those who follow a low-sodium diet. Moreover, sodium waste can be harmful to the environment, so not using it is more eco-friendly.

The potassium chloride water softener will use the same ion-exchange process normal softeners use to remove the hard water minerals. But instead of replacing the minerals with sodium, the beads will release potassium into the water. Potassium is necessary for a healthy life, but some medical conditions might restrict your access to it. If you suffer from diabetes, heart disease, or other chronic medical conditions, you should consult with your physician before drinking potassium-enriched water. 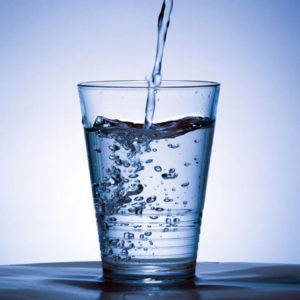 Even though potassium chloride does not contain sodium, it’s still salt. So what do you do if you want to soften your water but you don’t want to use any kind of salt? Well, you use a salt-free softener, of course.

Salt-free water softeners work in a similar way to the magnetic conditioners we described above. These systems are attached to your home’s main water line and they produce a wide range of frequencies.

When the water passes through those frequencies, the crystal structures of calcium and magnesium change. By changing their structure, these elements won’t tend to bind to one another, so they won’t make upscale. Thus, the water will move freely, and it won’t cause any build-ups.

Even though the water won’t produce build-ups, that doesn’t mean that the calcium and magnesium ions won’t be present in it. So in a way, you can say that these systems don’t soften the water at all.

However, the results will be present, and you won’t need to use so much soap to wash and your bathroom will look cleaner than ever before.

You could say we saved the best for last. We wouldn’t say that the sodium-based water softeners are the best softeners on the market, but they’re definitely the most popular models. One of the reasons they’re so popular is that they’re really effective. Another reason why people prefer using these models over others is that they’re cost-effective. These softeners are usually decently priced, and they offer a good whole-house water softening solution. It’s true that the water tastes a little bit saltier after using these models, and that you have to carry the salt bags to your basement every time you have to recharge the resin beads. But what we can say for certain is that the benefits of using these models strongly outweigh their disadvantages

In case you want to learn how to soften hard water at home by using alternative ways, check out our article on the topic. On the other hand, you may already have a water softener installed which is causing you problems. In that case, you may find our article on water softener repair and troubleshooting useful.

Benefits of Using Soft Water In Your Shower 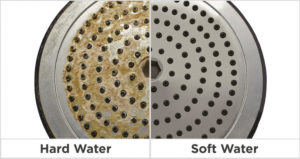 Even though there are no efficient water softener shower heads, that doesn’t mean you shouldn’t use soft water when you shower. Here is a list of some of the benefits you’ll experience when showering in soft water instead of hard water.

This might not seem like much, but showering in soft water can lower your expenses. Thanks to the reduced mineral content, the fatty acids in the soap will not cling to one another, so you will use less soap, shower gel, and shampoo to wash.

The minerals in the water will not only cling to your shower, but they will also cling to you as well. As a result, your hair looks lifeless and dull even right after you wash it. If you use soft water to shower, your hair will look full of life and its color will be better. You might even be able to manage it more easily.

Hard water and soft water affect the skin differently. When you wash using hard water, your skin tends to dry out quickly. Even right after you wash it, the skin might feel sticky. In some rare cases, using hard water to wash can lead to rashes or even eczema outbursts. On the other hand, soft water will do a better job of hydrating your skin. Not only will your skin look better, but it will feel better as well. The natural oils on your skin will make it somewhat shiny and give it a healthier look.

As you could see, the water softener shower head you bought was not the real deal. Even if the showerhead seemed to work for a short amount of time, it cannot be functional in the long run because it has no means of recharging its resin beads, and it cannot flush the calcium and magnesium ions in a different drain.

Luckily there are other water softening solutions you can use to make sure you shower using the best water possible. You may also be interested in our article about how to remove the water flow restrictor from your showerhead.