Manganese is a common, naturally occurring ubiquitous silver-grey element or mineral that is found in rocks, soil, surface water, groundwater, and foodstuff. Manganese is an element of over 100 minerals and is not found naturally in a pure elemental form but normally occurs with iron. Manganese is a trace but essential nutrient that is needed in small amounts in both humans and animal bodies.

The symbol that is used for the chemical element manganese is Mn. Manganese has an atomic number of 25 meaning there are 25 protons in the nucleus of each manganese atom. Manganese has an electron configuration of [Ar] 3d5 4s2 and an atomic mass of 54.938044 u. Manganese was first described by an Austrian chemist Ignatius Gottfried Kaim in his dissertation published in 1770 before better-known synthesis and discoveries in the year 1774 by Carl Wilhelm Scheele, a Swedish pharmaceutical chemist, and Johan Gottlieb Gahn who was a Swedish chemist and metallurgist.

What is the use of Manganese?

Manganese has a number of uses in a wide range of industries as listed below:

How can Manganese contaminate water? 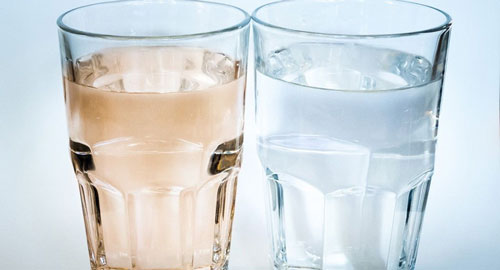 Anthropogenic activities contribute significantly to the contamination of water resources by among other elements, manganese. This can take forms like industrial effluent and emissions, soil erosion, application of pesticides rich in manganese, burning of MMT containing unleaded gasoline, and landfill leaching. When manganese is part of emissions, it will eventually settle on different surfaces like soil or tree leaves and when it rains, the manganese leaches into the surface or groundwater system. It is important to note that in surface water, manganese occurs in both the suspended form or dissolved form depending on the pH or anions present. In anaerobic groundwater, elevated manganese concentrations are found in a dissolved form.

Manganese or any of the manganese compounds are not regulated in drinking water. However, a United States Environmental Protection Agency (USEPA) non-enforceable guidance level for aesthetic quality, a Secondary Maximum Contaminant Level (SMCL) of 0.05 mg/L, does exist for manganese. Furthermore, manganese is generally not considered to be very toxic when ingested with the diet, and since drinking water accounts for a relatively small proportion of manganese intake, the regulation of manganese in water does not significantly pose a health risk reduction for persons served by such public water systems. Manganese was added to the Contaminant Candidate List (CCL) as a contaminant on 18 July 2003.

How does Manganese affect Water Quality?

Water quality is the physical, chemical, or biological characteristics of water and how that can be linked to its suitability for specific uses. The USEPA developed a health advisory level for manganese in drinking water of 0.3 mg/l which is projected to be protective of lifetime exposure for the general population. Drinking water above the advisory levels for a long time might be harmful to the consumers of the water.

Manganese in water can stain laundry, can result in scaling of plumbing, and can affect the aesthetic value of water; the color of water high in manganese can become brownish, black, and can smell or taste bad. Water-rich in manganese can also leave brownish, black, or black stains in sanitary ware like bathtubs, sinks, or showers. Due to the above being advisory values, according to the GDWQ, public water systems are not required to meet these values.

What is the toxicity level of Manganese?

Manganese is among the contaminants that are not currently regulated in terms of drinking water quality but are known to occur in public water systems. As such there are no manganese toxicity levels in drinking water that are set but just advisory levels of 0.3 mg/l for lifetime exposure through use.

However, some of the dangers of long-term consumption of water with elevated manganese levels include problems with memory, attention, and motor skills, especially among the elderly and children. Infants (babies below 1-year-old) may also develop learning and behavioral problems when they consume water with high levels of manganese.

What are the health risks of Manganese in drinking water?

The health risks of manganese in drinking water are listed below:

How to determine Manganese in water? Where the public water supply system does not test for manganese, home water testing is an option. One can buy a home test kit that can test for manganese like the color disk that is relatively accurate. For more accurate results, one can have a sample taken and analyzed by an accredited laboratory. Likewise, for private wells where accurate results are, one needs to take a water sample and send it to an accredited laboratory for analysis.

Can Manganese be filtered out in the water?

No, boiling tap water will not remove manganese. Manganese is not a living organism like bacteria or protozoa that can be killed by boiling water. In fact, boiling water with high levels of manganese for a long time can increase the concentration of manganese due to water evaporating whilst the constituent manganese remains in the water. However, the distillation of water can take out manganese as the water vapor rises out of the boiling chamber and gets condensed elsewhere thus leaving behind the manganese constituent in the boiling chamber.

What kind of filter can remove Manganese in water?

In a nutshell, the water filtration types that are able to remove as many contaminants as possible are reverse osmosis and distillation. However, these 2 purification methods are also quite expensive; distillation needs a lot of energy to heat the water and a reverse osmosis kit is expensive to buy. Chlorination leaves a bad taste and odor compared to the other purification methods.

Does stagnant water have Manganese?

Yes, stagnant water can have manganese. Before the water settles, it might appear as clear because the manganese is dissolved in the water and is therefore invisible. However, when the water has been exposed to oxygen, oxidation occurs such that manganese and normally iron form out and precipitate such that they settle at the bottom. As such manganese-rich water becomes visible as brownish-black or blackish matter settling at the bottom of the water that is stagnant.

Does well water have Manganese?

Yes, well water normally has manganese. This is because manganese is one of the constituents that can occur in water either naturally or through anthropogenic activities. Naturally, manganese originates from the weathering of manganese-rich rocks or their presence in soil. When it rains, as water moves through the unsaturated to the saturated layer, it takes along with its constituents like manganese which ends up being in the groundwater system, hence will naturally end up in well water.

Manganese can also enter into well water because of human-induced activities like mining that disturbs manganese-rich rocks, industrial effluent, leaching from landfill sites, use of pesticides rich in manganese. These activities will release manganese that will leach into the groundwater system such that well water will eventually have manganese.

Does tap water have Manganese?

What is the safe amount for consumption of Manganese in drinking water?

The USEPA has set an advisory limit for manganese of 0.3 mg/l (300 µg/l) for drinking water and 0.05 mg/l for aesthetic issues. These limits are considered safe for lifetime usage of water. However, the World Health Organization (WHO) set an acceptable and safe level of manganese in drinking water at 0.05 mg/l (50µg/l) depending on the local circumstances.

Do the top countries that produce Manganese have problems with their drinking water?

China has well-documented water quality problems that include high concentrations of manganese in raw and treated drinking water. Manganese was found to be a problem in surface water and groundwater in the Ganjiang River in the Jiangxi Province and also in the Mangshe and Tongyu rivers. Although generally water quality is poor in China, the public water authorities purify water against manganese.

For South Africa and Australia, there are no documented cases of manganese being a problem in potable water. However, the Australian Guidelines for Drinking Water Quality outline detailed strategies and methodologies for controlling and treating manganese to prevent pollution of water resources and contamination of drinking water.