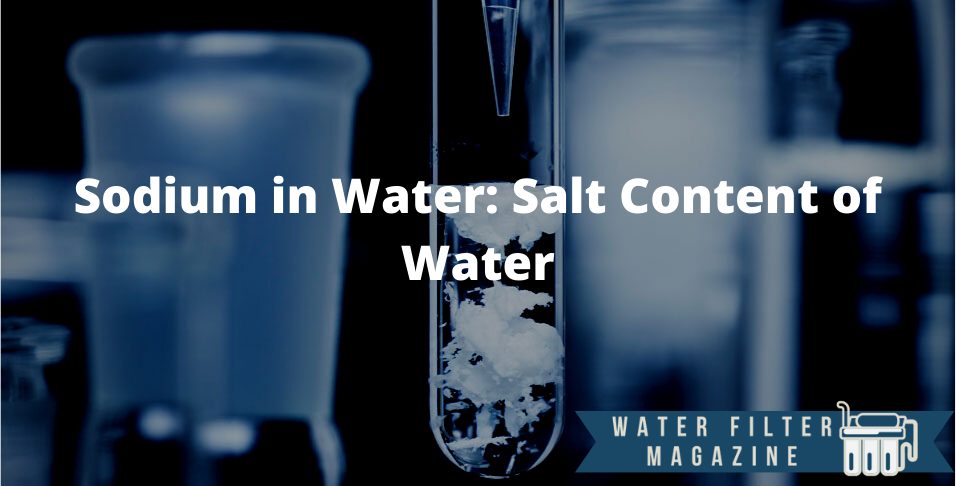 On the other hand, sodium has some negative effects if consumed at high levels. High sodium levels are dangerous to those with hypertension and those with cardiovascular diseases. Elevated sodium concentrations are harmful to those suffering from kidney problems and to those on a low sodium/salt dietary regime. Acute doses of sodium may include nausea, vomiting, convulsions, muscular twitching

The Guidelines for Drinking Water Quality (GDWQ) gives a set of recommendations for safeguarding public health through outlining sets of limits for various inorganic, organic, trace, and microbiological parameters for drinking water quality and its associated domestic uses.

The World Health Organisation (WHO) is the United Nations (UN) body that deals with various global health issues including the development and updating of the GDWQ. WHO developed the first edition of the drinking water quality guidelines between 1983 – 1984 and revised the guideline during the years 1993 – 1997, 2004, and 2011 to incorporate new and emerging information and expert opinions on drinking water quality.

The United States Environmental Protection Agency (US EPA) has published the health criteria as being the threshold in terms of the level of concentration of the pollutants (in this case sodium) before people consuming water contaminated with the pollutant start having their health affected.

What is the health benefit of sodium within the water? 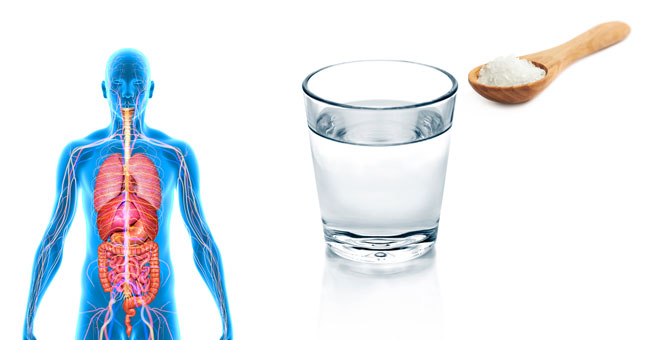 Sodium as an electrolyte and a mineral dissolved in water has a number of benefits. Sodium is essential for the normal functioning of the human body. Sodium helps to maintain the fluid balance in human or animal bodies. To achieve this, sodium regulates the amount and distribution of fluid or water in and out of cells in human bodies, therefore, playing a vital role in the maintenance of the resting energy of cells. Sodium is vital in sustaining the normal functioning and contractions of the muscles of humans and animals. Such contractions enable the body to carry out different functions and activities. Sodium plays a key role in the optimum functioning and contractions of the human heart. Sodium is important in maintaining the functioning of the nervous system, i.e. the transmission of nerves or electrical impulses between the brain and the rest of the body. Sodium also plays a key role in the regulation of blood pressure in humans. Sodium allows the transportation of specific nutrients and compounds in human bodies like amino acids, glucose, and vitamins.

What is the health level of salt within drinking water?

Due to the fact that the intake of sodium in drinking water is small (less than 10%), there is no health-based guideline for sodium explaining why it is categorized under the non-standard contaminants. Some government health departments have recommended a threshold of sodium levels of 20 mg/l in drinking water, especially for those with low sodium diets. However, it has been proven that sodium may only affect the taste of drinking water at concentrations that are above 200 mg/l.

However, from a dietary perspective, sodium is supplied by different foodstuffs like vegetables, meat, fruits, and processed foods. The amount of salt needed for a human body differs with age and gender. The World Health Organization (WHO) recommended a sodium intake of 2g/day which translates to 5g/day (teaspoon) of salt (sodium chloride) for adults of at least 16 years of age. For children (2 to 15 years old), WHO recommended the reduction of sodium intake based on their energy requirements.  However, one needs to take into account that most of the foodstuffs have sodium such that it is easy to exceed the WHO recommended limits.

Do water filters clean the salt from water?

Yes, water filters do clean the salt from the water. There are a number of ways in which salt can be filtered from drinking water depending on how water filters work. The most effective way of removing salt or sodium is Reverse Osmosis (RO). This could be as a result of the natural salt levels in the water or as a result of water softening which removes water hardening but because it utilizes sodium chloride, this results in slightly elevated salt levels in the water. RO is effective at removing or reducing sodium among other constituents. RO is able to remove or reduce these constituents like sodium through the physical process of filtration using the semipermeable membrane in the pressurized water chamber. The removal occurs because most mineral constituents are larger than the water molecules and they get trapped by the semi-permeable membrane.

One of the effective ways of removing salt from water is through the use of deionization or demineralization. This involves the passing of water under treatment through an electrically charged resin bed. The resin beds will grab onto both the positively charged ions (cations) and negatively charged ions (anions) responsible for water’s charge including the cation sodium, allowing only deionized water to pass through. The water deionizer works on an ion exchange principle such that a sodium (Na+) ion replaces hydrogen (H+) ion. This results in water that is totally free of charge.

Distillation is also another way of removing salt from water. Distillation involves boiling water until it evaporates and condenses into a clean container. Impurities that might have different boiling points remain in the boiling chamber and are washed out during cleaning. Although the end product of distilled water is almost similar to deionized water, they are different such that distilled water is purer. After having gone through the process of distillation, the water becomes devoid of dissolved minerals, contaminants, and any other impurities such that the water has no charge at all.

Is it healthy to filter the salt from drinking water? 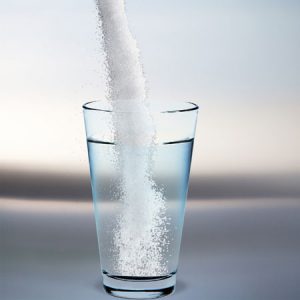 Yes, it is healthy to filter salt from drinking water. However, it is important to note that the filtration of salt can be done based on different circumstances which justifies this filtration process.

The main reason for the filtration of salt from drinking water is to lower the levels of sodium or salt in water either due to naturally elevated levels in the arid or semi-arid areas or due to anthropogenic activities. Under such circumstances, the water might be marginal quality water, is brackish and the saltiness can even be tasted. It becomes important to undertake water filtration to reduce the salt levels to lower, healthy and acceptable levels.

However, some water filtration methods like RO or distillation remove almost all minerals in water including minerals that are essential for human bodies like sodium. Under such cases, the water becomes unhealthy and might need the introduction of such essential minerals through the process of remineralization.

What are the harms of high sodium water?

High levels of sodium in water can have some negative health consequences. Although a small proportion of daily intake of sodium is taken through water (less than 10%), areas that have brackish water or very elevated sodium levels in water can pose health risks, especially to the vulnerable groups discussed below.

Although high levels of sodium have been noted as being undesirable from health and aesthetic perspectives, it is less dangerous compared to elevated concentrations of other water contaminants. Contaminants like coliform, E. coli, and some trace elements like lead can result in illness in humans. However, some contaminants like iron and chloride can alter the taste of drinking water, i.e. make it have a rusty taste and a salty taste respectively.

What is the function of sodium ions within the water?

Sodium as an ion can originate from several sources like rocks, soil, salinization in arid areas, and irrigation. The fate of the sodium ions is often surface or groundwater where it is in a dissolved form as salt, positively charged ion, or electrolyte.

Sodium ions in water are sources of nutrients for people who consume the water. This is because sodium is needed by human bodies for different bodily functions like maintaining a fluid balance, sustaining muscle contractions, and optimum heart function.

Sodium together with other dissolved salts at low levels gives water its taste. Distilled or deionized water is devoid of the taste due to the lack of salts including sodium.

Is salt included within the definition of water pollution?

Yes, salt (sodium chloride) is included within the definition of water pollution once it exceeds the limits for safe and beneficial use of water. This is because water can be used for different purposes like drinking, food preparation, agriculture, aesthetic purposes, and aquatic ecosystems. Each of the different water uses has ranges for safe and beneficial use, especially at low concentrations of sodium. Once the limits have been exceeded, salt becomes a nuisance in water hence becomes categorized as water pollution. Sodium chloride contributes towards salinity in water which is one of the problems of water pollution, especially in arid and semi-arid areas. Using a salinity classification system water can be categorised as fresh (<500 mg/l), marginal (500 – 1,000 mg/l), brackish (1,000 – 2,000 mg/l), saline (2,000 – 10,000 mg/l), highly saline (10,000 – 35,000 mg/l), and brine (>35,000 mg/l) depending on the level of salts in the water. Sodium is relatively less problematic than chloride because when chloride gets into water, it is difficult to remove. Also, removing chloride requires energy extensive methods like reverse osmosis and distillation and can become expensive.

According to the World Health Organisation, from a drinking water perspective, sodium can give a detectable taste at a concentration of 200 mg/l whilst chloride can be detected at levels of 250mg/l. For any concentrations above the detectable limits, salt starts being a nuisance in water through giving a distinctively salty taste, giving an objectionable salty taste, or giving a repulsively salty taste. These increasing salty tastes can raise the health risk to sensitive groups, can result in dehydration in infants, and even can cause nausea and vomiting in adults. Therefore, elevated levels of salt in water can be categorized as water pollution.

From an aquatic ecosystem perspective, elevated salinity levels in streams, rivers, and wetlands can be problematic to aquatic species like fish and aquatic invertebrates. Most aquatic organisms are either exclusively freshwater or exclusively saltwater tolerant and only a few species can tolerate wide ranges of salinity. Most aquatic fish species can tolerate only freshwater such that should the salinity continue to worsen, this results in worsening water quality and subsequently water pollution, resulting in fish deaths. Therefore, salt in water can be problematic for aquatic organisms and can be classified as water pollution.

Is salt in water a contaminant?

Yes, salt is regarded as a contaminant in water. The concentration of salt (sodium chloride) can be expressed as salinity. Once the salinity levels deteriorate beyond the freshwater category, consumption by humans becomes problematic without adequate water treatment and tolerance. Also, survival by most aquatic organisms becomes difficult except for those that can survive both in freshwater and salty water. Under such circumstances, salt in water is regarded as a contaminant.

Sodium (salt) was added to the United States Environmental Protection Agency (US EPA) Contaminant Candidate List on 18 July 2003 meaning that sodium is among the contaminants that are not currently regulated in terms of drinking water quality but are known to occur in public water systems. Salt was added as a contaminant because it can cause negative public health concerns among humans, can occur in public water systems and the regulation of sodium presents an opportunity for the reduction of health risks for people served by that public water system.  Sodium fulfilled the 3 criteria resulting in it being added to the Contaminant Candidate List. Therefore, salt is recognized as a water contaminant.