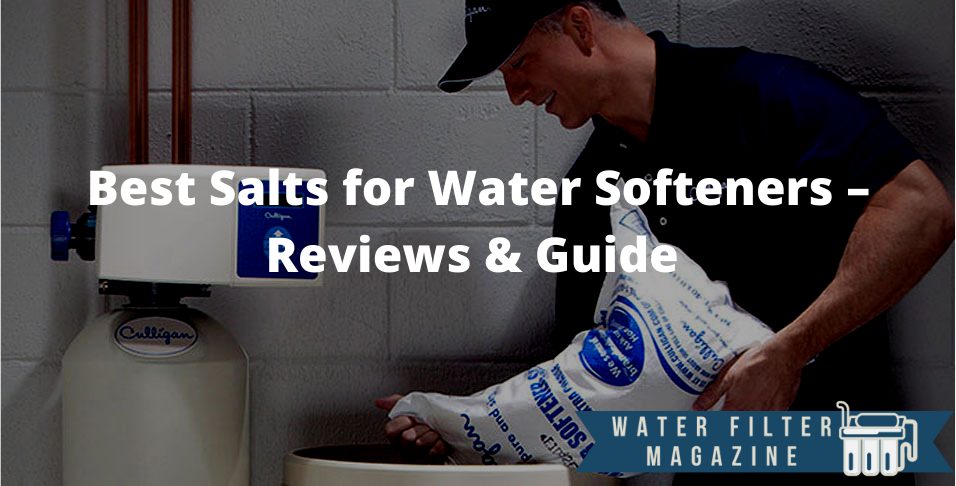 Water is not just, well, water! When talking about water and appliances, you have to take into account hard and soft water. If you didn’t think that water can be hard, we’re here to tell you the contrary.

In fact, the so-called hard water may be the one responsible for the watermarks, stains, or filmy residue that you might have on your bathtubs and sinks. But, did you know that hard water can also decrease the lifespan of the appliances that use water, as well as of your home’s plumbing? This is because hard water comes with magnesium and calcium – in short, it has high mineral content. The presence of these minerals can seriously affect industrial settings, such as cooling towers, boilers, and so on.

How do you get rid of the hard water? Well – you don’t! Instead, you install a water softener for your water supply and then buy the appropriate salt for it. Appliances equipped with the best salt for water softeners will ensure that only soft water is used.

Let’s now take a look at some reviews of salts for water softeners, after which we’ll tell you everything that you need to know about the salt that you have to put in your water softener!

Reviews of the Best Salts for Water Softeners 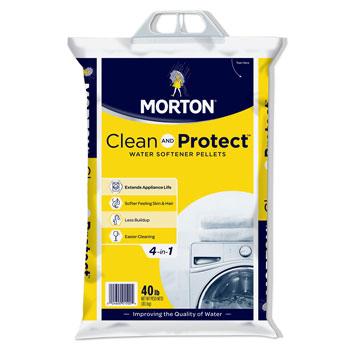 These water softener pellets from Morton come with a rating of four stars, making this product one of the best in terms of salt for water softeners. On top of that, this particular item is the number one seller in the water softeners category.

Therefore, you may want to give it a try. However, before you make your choice, let’s take a look at this product’s pros and cons, as you can’t possibly make a decision without knowing such information. 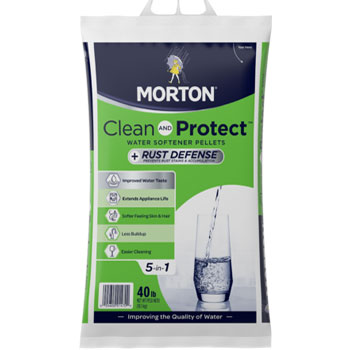 The second product on our list comes from Morton as well – this time, with a tad better rating, of 4.5 stars. This time, the bag is 10 lbs. lighter, making transportation easier.

The product can improve the taste of water and can also prevent rust stains on laundry and appliances. 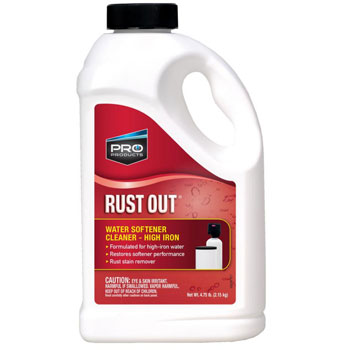 The Rust Out water softener cleaner from Pro Products is specially designed for high-iron water. On top of that, the label claims that this specific type of salt can restore the performance of the water softener.

It is made in the USA and it is capable of removing rust stains from sinks, toilets, showers, and tubs. 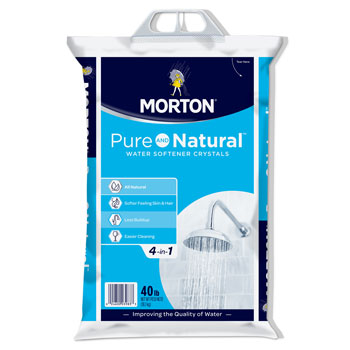 The third Morton product from our list comes in the form of crystals and, once again, in a 40 lbs bag. Yes, the bags are quite heavy, but given that you have to use one bag every single month, it’s only natural that it would contain a lot of salt.

This is an all-natural product and can even provide your skin and hair with a softer feeling. Moreover, soaps and detergents will lather better with this kind of salt in your water softener 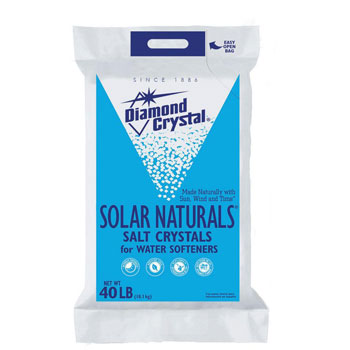 This Cargill water softener salt comes with a 4-star review. The product is labeled as solar natural salt crystals and it is polybagged, weighing 40 lbs. Some people decided to use solar salt crystals because they are usually cleaner and more efficient than the usual rock salt that most products feature.

The good thing about this product is that it requires no channeling, mushing, or bridging. Moreover, this item can also be used for poultry and meat processing if required. 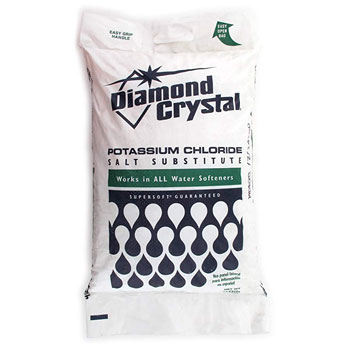 The Diamond Crystal water softener salt is labeled as a salt substitute, as it actually is potassium chloride. Reportedly, it works in all types of water softeners. This specific product comes with a five-star rating on Amazon.

It is considered a proper alternative choice to the usual sodium chloride – potassium chloride can be used in the water meant for plants and animals. Thanks to it, household fixtures and appliances will no longer have yellow/rusty stains on them. Moreover, the pipes and valves won’t get clogged as often as before. 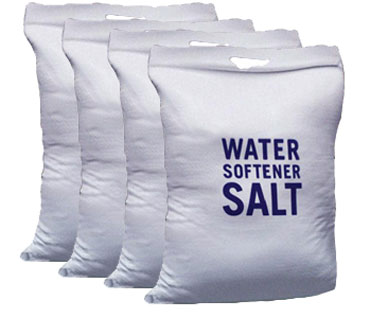 If you own a high-quality water softener, you shouldn’t just assume that you will need salt for it. Some have made the mistake of buying tens of salt bags in advance for their water softeners – only to find out that they’ve purchased a salt-free water softener.

Before buying softener salt, make sure that your water softener is salt-based and works via the ion exchange process. Salt-free water softeners use the Template Assisted Crystallization process to turn hard water into soft water.

Make sure that you can handle a tad saltier water before buying water softener salt. If you do not enjoy such a taste, then you’ll want to buy potassium chloride salt, as it isn’t as salty as sodium chloride.

When it comes to the water softener salt itself, there are not a lot of things that you should take into consideration.

The only thing you have to choose is the type of salt – either potassium or chloride – depending on how and where you want to use the water provided by your water softener.
Obviously, this doesn’t mean that you should forget about the maintenance that comes with the use of salt and of a water softener: you will have to check the tank for salt mush, salt bridge, and humidity.

What Exactly Do Water Softener Salts Do?

Most water softeners on the market are based on ion exchange items. This means that the hardness ions – those responsible for turning water into hard water – are exchanged for salt ions.

Unlike water purification tablets, which kill the unwanted things in the water, an ion exchange system will just switch the ions between them and soften hard water.

Obviously, the salt is the main catalyst here – a water softener will not work unless it is fed salt.

Now, given that you use water daily, it goes without saying that the resin beads responsible for holding the hardness ions still will wear out, so to speak. Here is where the salt bags we have reviewed earlier come into play!

The resin beads can actually be recharged by adding salt bags/tablets/crystals/pellets to the water softener’s brine tank. When recharging the beads, the hardness ions will swap places with the salt ones within the brine tank and any excess minerals will be rinsed into the wastewater drain. You can also look for a top-rated water softener resin.

How Can You Tell If Your Water Softener Needs Salt?

You’ve now learned that salt is quite essential to the process of water softening. Therefore, it is very important for you to know when to add more salt to the system. Keep in mind that the size of the brine tank, the type of water softener, the household water usage, as well as the water hardness level determine how much salt you have to add – including how often you need to replenish the salt supply.

However, you can figure out when your water softener needs more salt added to it if you take into account the following things:

The Inside of the Tank

You have to check this and determine the salt level within it. You can do so by lifting the cover of the brine and looking inside the tank. If the salt appears dry and the brine tank is less than half full, then you have to refill it until it is just over half full. On top of that, if the water level is above the salt or the salt itself appears wet, you should fill the tank about half full.

The Age of the Water Softener

Salt usage is affected by the age of your water softener. For example, a 10-years-old softener may use more salt than a brand new one. This is because an older system is not that efficient. Newer models usually need new salt every six to eight weeks, while older models have to be regularly checked to figure whether they need more salt or not.

The Issue of Bridging

Bridging affects water softeners by limiting the salt the latter gets. This is why it is strongly recommended that you inspect the brine tank every two or three months, to make sure that salt bridges didn’t form inside it. A salt bridge is likely to appear if the salt level in the tank doesn’t go down after months of use or when you simply notice that you don’t have soft water. Bridging may also be avoided by having your water softener in a low-humidity area, using only high-quality salt, and by keeping your brine tank exactly half full of salt.

Of course, you may also consider adding new/more salt to your water softener when you notice that you don’t have soft water available anymore. Given that you will most likely notice the difference between hard and soft water once you install a water softener, you will be able to easily determine if your softener needs more salt added.

Naturally, the form that the salt comes in is important for your water softening system. After all, you wouldn’t have to worry about so many things if you just had to pour a bunch of salt in your water softener.
In this respect, we mention water softener crystals and pellets. Each of the aforementioned is recommended for different types of household and usage, as you will see in the following lines.

Buying salt and adding it to your water softener doesn’t mean that your job is ready, and you can freely enjoy soft water from now on! As mentioned above, you will have to regularly check your brine tank and make sure that everything is in order.

Here are some water softener maintenance tips that will help you keep the salt, softener system, and water in pristine condition:

As you can see, brine tank maintenance is not hard at all. The only thing you should be doing is actively check the brine tank. If you do so, you will be able to spot any issues and fix them before they become a real problem and affect your entire water-softening system.
Therefore, keep in mind to fully check the brine tank at least once a month!

How Do You Add Salt to a Water Softener?

Then, you will have to:

It is important to mention that water softeners, while able to regenerate themselves based on used gallons, do require manual regeneration, in order to ensure that the unit cleans itself properly.

As you’ve seen, using such a system is not hard at all. In fact, it is actually convenient, with some sources claiming that a water softener can actually help you save money. In the end, we remember you to carefully pick the salt that you are going to use in your water softener. Make sure to refer to our article whenever you come across a certain type of salt so that you know whether it is good for your unit or not!